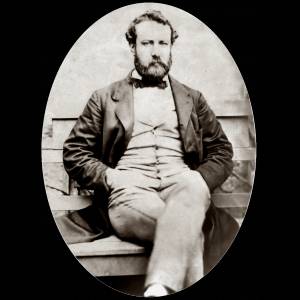 The great 19th century French writer Jules Verne(1828–1905) was a literary superstar in his day and even today is an extremely popular author all over the world, with such titles as Around the World in Eighty Days, Twenty Thousand Leagues Under the Sea, The Mysterious Island, and so on, still read globally and there have been many films and TV series based on his work. His novels have not only inspired generations of readers and film-makers, but also scientists, technologists, explorers and inventors, all over the world.

Jules Verne is the second most translated author in the world–after Agatha Christie and before William Shakespeare, and his works appear in more translations per year than any other author. Yet, ask any English-speaking reader, child or adult, whether they have even heard of Jules Verne’s Michel Strogoff (as it is known in French) and the answer will almost certainly be no!

This is no doubt due to the fact that after its initial translation into English in 1876 at the same time as its publication in French, subsequent editions published in English (and there are only a few) appear to consist of edited and/or abridged versions of this original nineteenth century translation, and they are often stodgy and dated.

And yet in France, Michel Strogoff is considered not only to be one of the world’s greatest adventure novels, never out of print and inspiring generations of readers, it is also considered to be Verne’s best novel, full stop. Lively, gripping, with vivid characters, a cracking pace,a richly-depicted Russian setting, and deft touches of humour, this exciting chase novel, originally published in Jules Verne’s fiction series, ‘Extraordinary Voyages’ deserves to be reintroduced to English-speaking readers. And who better to capture the lively spirit of the original than the distinguished translator Stephanie Smee!

Stephanie is a translator into English of all things literary and French.Her other languages include German, Italian and Swedish. Having worked as a lawyer in Sydney and London, Stephanie happily traded in a legal career for a return to her linguistic calling. After several years as a legal translator, she left the world of pleadings and contractual documents behind and made her literary translation début with a bestselling new English translation of 19th century Russian-French children’s author, the Countess de Ségur’s Fleurville Trilogy published by Simon & Schuster (Australia) in 2010.The Trilogy includes the perennially popular Sophie’s Misfortunes, Camille and Madeleine: A Tale of Two Perfect Little Girls and The Holidays. Stephanie’s subsequent translations of the Countess’ works – also published by Simon & Schuster (Australia) – include the wonderfully cheeky Monsieur Cadichon: Memoirs of a Donkey (2011) and A Room at Guardian Angel Inn (2012) and its sequel, General Dourakine (2013).

Other translating projects of Stephanie’s include an ongoing interest in 19th century French culinary writings, the musings of Alexandre Dumas on the work of Delacroix and other wonderful literature emerging from France, be it YA, bande dessinée or a Goncourt prize-winning work!

Stephanie lives with her husband, Paul, and two children in Sydney.

Born in Indonesia to French parents and brought up in Australia and France, Sophie Masson is the award-winning and internationally-published author of over 60 books, for children, young adults and adults.

STEPHEN HART, author of The Lighthouse at Pelican Rock

Stephen Hart was born in Singapore to English parents, and emigrated from England with his family when he was seven. Stephen has a PhD in archaeology and spent several years in Jordan running archaeological digs. He is still regarded as one of the world experts on Edomite pottery.

He moved from archaeology to computer programming and has worked in computer gaming, embroidery machines and racecourse totes. He now works for a major Australian telco. He is an accomplished jazz musician (sax and piano). He is married to Australian author Pamela Freeman and they live with their son in Sydney’s inner west.

The Lighthouse at Pelican Rock is Stephen’s first children’s book.

SIMON HIGGINS, author of Tomodachi: The Forest of the Night

Simon Higgins is a former police officer, prosecutor and private investigator specialising in murder cases. A martial artist and published author with an international career spanning over 20 years and 14 novels published in several languages, he has also been an Australian Government Ambassador for Asia Literacy and an Endeavour Award Recipient, funded by his country to live and study in China. Simon was the first westerner to pen an interactive Visual Novel published in both Chinese and English. In 2008 he competed in Kyoto, Japan, in the annual Taikai, the world championships of the sword art Iaido, held on a mountaintop before a Japanese prince. Simon placed fifth. When not working on novels or teaching around the world, he leads a professional team writing an animated series for Chinese TV.

Jenny Blackford, author of The Girl in the Mirror(winner of the 2020 Davitt Award for Best Children’s Crime Novel)

Jenny Blackford writes poems and stories for people of all ages, usually with a tinge of myth and legend, ancient history, science, or deep time. Over 30 of her short stories and over 50 of her poems have appeared in Australian and international anthologies and journals. She loves to write for kids as well as adults. Her poems and stories for kids have been published in the School Magazine, Our Home is Dirt by Sea: Australian Poetry for Australian Kids, Stories for Nine Year Olds and other wonderful places. Kids aged 11 plus should enjoy her poetry books The Loyalty of Chickens and The Duties of a Cat, both published by Pitt Street Poetry, as well as her short YA novel The Priestess and the Slave, published by Hadley Rille.

Jenny’s most recent poetry prizes are first place in the NEWC Thunderbolt Prize for Crime Poetry 2017 and first place in the Humorous Verse section of the Henry Lawson Awards 2017. She won two prizes in the Scarlet Stiletto Short Story Awards 2016 for a murder mystery set in classical Delphi, with water nymphs. In 2014 she was awarded third in the prestigious ACU Prize for Literature 2014.

Julian Leatherdale was a novelist, scriptwriter and playwright. His theatre work includes four comedy cabarets, two musicals (Alex in Videoland and The Golem of Prague), a monologue for Breaking Bread and the black comedy The Man Who Became Santa. He wrote animation scripts for children’s TV with SquareZero, London and researched and co-wrote two Film Australia-ABC TV history documentaries The Forgotten Force and Return to Sandakan. His adult historical fiction novels are Palace of Tears (A&U, 2015 and HarperCollins Germany, 2016) and The Opal Dragonfly (A&U, 2018), with The City of Shadows(A&U), forthcoming in 2020.  Julian lived in the Blue Mountains with his family, but sadly passed away in 2020. The Phantasmic Detective Agency  was his first children’s novel.

Phoebe McArthur lives in a run-down, yet cosy cottage in the middle of nowhere.She’s not at all lonely thanks to her four cats, three chooks, two guinea pigs and her extensive library. If she’s not tipping cats off her lap as she writes stories, she’s cooking all sorts of yummy food, such as scones with extra cream and homemade blackberry jam, or doing art at the table near the window, which has the best view of her garden.

Charlie Chaplin: The Usual Suspect is her first middle-grade novel.

Pamela Rushby, author of The Secret Battle (out late 2021)

Pamela Rushby is the author of over 200 books for children and young adults, as well as children’s TV scripts, documentaries, short stories and freelance journalism. Pam has been an advertising copywriter, pre-school teacher, and producer of educational television, audio and multimedia. She has won several awards, including the NSW Premier’s Ethel Turner Prize, five CBCA Notable Books – and a bag of gold coins at a film festival in Iran! Pam believes the strangest, most riveting, heart-breaking, laugh-out-loud stories aren’t fiction. They’re real. They come from history. And she loves tripping over unusual incidents from history – and then writing about them. Her website is www.pamelarushby.com

Michael Grey, author of Children of the Wild (out March 2022)

Michael Grey is a writer of children’s stories, science fiction, fantasy, contemporary, and horror, and does not see why all those genres shouldn’t be combined. He has had stories published in print, online and in audio, and has been shortlisted for the Parsec and Aurealis Horror novella awards. When he’s not writing stories Michael can usually be found thinking about stories and spending time with his family.

Children of the Wild is his first published novel.